An afternoon with Luca Colombo: an opportunity to learn more about his artistic experience and get in touch with the reality of those who live for music.

The meeting is open to professionals, amateurs and enthusiasts; for those who wish to learn more, it is possible to book an individual lesson on Sunday morning.

To indicate your participation or book an individual lesson, please contact us

Luca Colombo, guitarist, teacher, arranger, has collaborated with many artists, the best of the Italian and international music world.

He has recorded three albums as a soloist and collaborated on various educational works.

Official Italian endorser for PRS Guitars, Vox Amps and Ernie Ball Strings, he graduated in 1990 from CDM in Milan with maestro Filippo Daccò in Big Band arrangement and in Jazz Guitar.

He holds numerous seminars and masterclasses in schools all over Italy on modern guitar, effects, improvisation and as a session man.

Born in Cernusco sul Naviglio in 1966, Luca discovered his passion for music at a very young age. He has been playing electric and acoustic guitar for about 20 years, with a preference for rock-blues music and the cross-over between traditional and electropop.

He works as a guitarist and session-man mainly in Italy, in television, record and live performances.

He has always had a great passion for the Beatles, hence the idea of publishing a record homage to them in the album Playin’ the Beatles, released in 2005 by Azzurra Music. 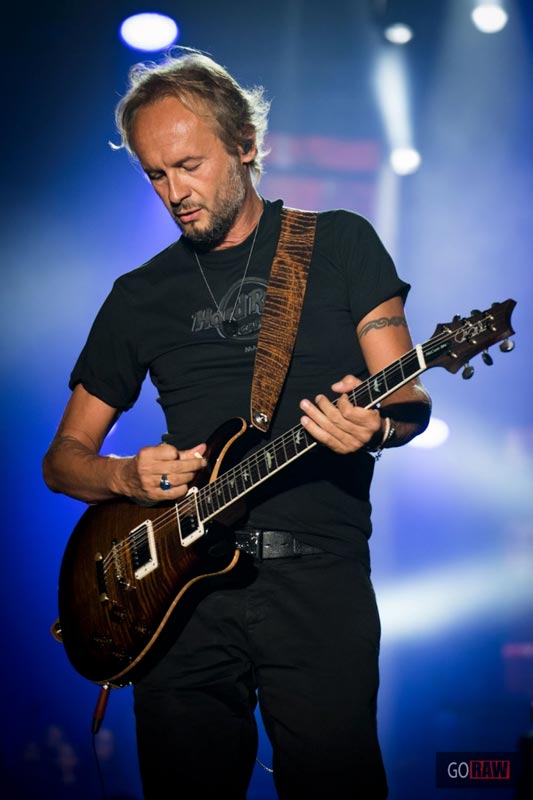 In addition to this, he has published two other solo albums for the Believe label, entitled Haze on the water and Sunderland, which contain exclusively songs of his own composition.

In his 30-year career he has been the guitarist on the most important tours of artists such as Eros Ramazzotti, Nek, Max Pezzali, Marco Mengoni, Ultimo, Mango, Anna Oxa, Antonella Ruggiero, Umberto Tozzi, Loredana Bertè, Malika Ayane and many others.

He has also collaborated on the music for numerous advertising campaigns including Volvo, Bauli, Ferrero, Plasmon, Superga, Enel and others. He has also contributed to numerous theme songs and soundtracks for RAI, Canale 5, Italia 1 and Rete 4.

He has recorded with many Italian artists, including Laura Pausini, Adriano Celentano, Mina, Alessandra Amoroso.

He composed and produced the soundtrack for the film Sottovento (2001) and has participated in the DVD production of accredited Italian artists.

Winner of the FIM award as guitarist of the year 2013, he has been the guitarist of the Sanremo Festival orchestra since 2007 and is currently teaching Jazz guitar at the Conservatory of Bergamo.

He published the trilogy of manuals Vita da chitarristi that is enjoying considerable success. He is also involved in the live project The Luca Colombo Band, which sees him playing on important stages in Italy and abroad, often combining a concert with a teaching seminar.